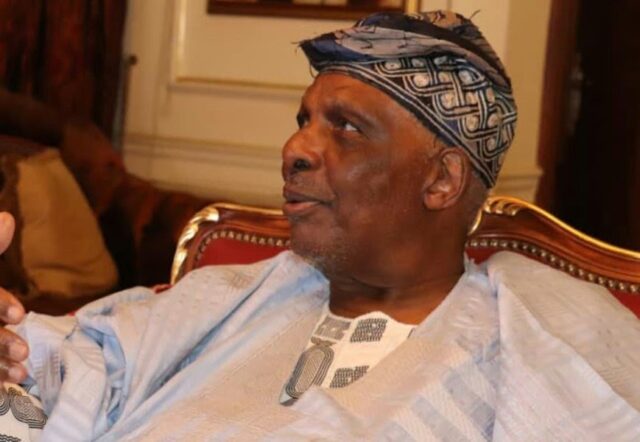 The Federal University of Technology Akure has paid glowing tributes to one of its benefactors, Sir Bode Akindele, who died on June 29,2020 at the age of 87.

The Vice Chancellor , Professor Joseph Fuwape in a tribute described Sir Akindele as a kind hearted Philanthropist who used his resources for the benefit of humanity especially the country’s teeming youth.

He recalled the donation of an ultra modern office complex to the University’s School of Management Technology and his productive partnership with FUTA on youth Development and integrated farm Development through the Bode Akindele Yield Initiative,BAYI.

“The Late Chief (Dr.) Olabode Akindeles footprint in the sand of time is simply indelible. The late great philanthropist, as a proverbial gold fish in a fish bowl, could just not be hidden in his life time. Tried as he could to be a silent achiever the magnitude of his accomplishments kept advertising him. The Federal University of Technology, Akure, saw a father figure in him and earnestly requested for his support in the onerous task of sustaining its image as the Best University of Technology in Nigeria, and quite characteristically, he gladly obliged.

The late philanthropic Patriarch donated the complex where the School of Management is fittingly domiciled. To give an idea into the size of that legacy structure, the list of the departments occupying the building would suffice Accounting, Business Administration, Economics, Entrepreneurship Management, Project Management Technology, and Transport Management Technology.

The impact of that donation alone on our nation through the transformation of thousands of youths, in learning and in character is better left to imagination. Suffice it to say that the Late Chief (Dr.) Olabode Akindele left our side of eternity with bountiful, sweet memories behind; he was a colossus in every sense of the word. He will be sorely missed by everyone who had had an encounter(s) with him.

In appreciation of the rare large-heartedness of the late Patriarch, FUTA awarded him Doctor of Philosophy (Honoris causa) in Business Management Technology in December 2006. The relationship has been growing in leaps and bounds ever since,” Professor Fuwape said in the tribute .

A two man delegation comprising Professor Tomola Obamuyi , Director University Advancement Centre and Adegbenro Adebanjo, Deputy Director, Corporate Communications, represented the University at the final rite of passage which kicked off at his Alomaja Residence Ibadan on Thursday, July 30,2020. Professor Obamuyi while commiserating with the Chief Bode Akindele family said they should take pride in the enduring legacies of Chief Akindele saying his footprints of Development in FUTA and across Nigeria and beyond cannot be erased .He urged wealthy Nigerians to take a cue from Chief Akindele by supporting worthy causes that will outlive them and benefit all and sundry perpetually.
He prayed that God will grant the family the fortitude to bear the irreparable loss.

Topshotnews provides you with factual, accurate and timely reports of happenings around the globe.
Contact us: info@topshotnews.com.ng