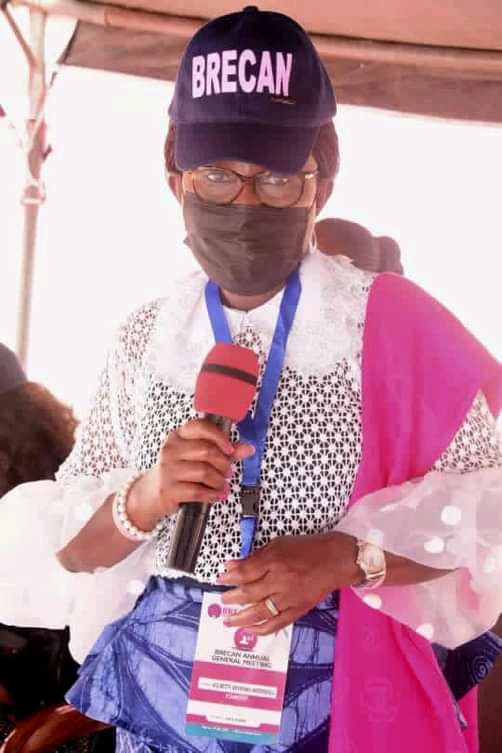 The need for members of the Breast Cancer Association of Nigeria ( BRECAN) to rise up to the task ahead and leave no one behind in advocacy and fight to combat incidences of Breast and Cervical Cancer in Nigeria today took the front burners as the association held its Annual General Meeting.

At the event held at BRECAN House, Alagbaka, Akure and well attended by members across different states of the federation, the wife of Ondo State Governor and founder, BRECAN, Mrs. Betty Anyanwu- Akeredolu in her speech said there is still a long way to go as a staggering 14, 000 women still die of breast cancer yearly.

Mrs. Akeredolu who acknowledged the support of all those who had in the last 24 years of BRECAN”s existence contributed to its success story said as a Non Governmental Organization, BRECAN has been through a lot of challenges that had toughened it to navigate the muddy waters of dysfunctional health system and poor attitude towards volunteerism.

While highlighting some of its achievements in the area of crowd funding, lobbying of the Ondo State House of Assembly to vote $3 million to fund cancer in the state in 2018 and as well in the area of policy direction among others, Mrs. Akeredolu urged all members to be dogged in their resolve to eliminate breast cancer as a life threatening disease in Nigeria.

In her own address, the National President, Mrs. Juliet Ogbogu while also acknowledging the challenges of the past few years, said through creative thinking, effective public education, patient support and advocacy among others, BRECAN has been able to cover a lot of grounds.

She also used the opportunity to restate BRECAN”s commitment to improving lives and offering hope to people living with Breast and Cervical Cancer in Nigeria.

One of the Lecturers, Dr. Mrs. Jenifer Saidu in her presentation titled: ” Understanding The Concept of Transformational Leadership and Group Dynamics”, underscored the importance of attaining transformational leadership by understanding the vision of BRECAN and aligning with it.

Mrs. Saidu while also urging members to key into the vision said the people must be made to see why they should buy into BRECAN”s vision, and that members must of necessity build formidable relationship with others members without expectation for reward.

Also speaking on the topic: “Understanding the Concept of Volunteerism”, another lecturer, Dr. Olaniyi Johnson explored the concept of volunteerism just as he urged the people to learn the act of volunteering their services in a safe environment and be committed to the cause saying volunteerism does not confer the rights to misbehave while discharging their duties.

Dr. Olaniyi however enjoined retirees and those without paid job most especially to explore the benefits of volunteerism as it helps aging process, increase job prospect and as well bridge social interactive gaps among others.

In another lecture titled “Advocacy and Partnership as Tools for Effective Project Implementation”, Mr. Promise Ihezie highlighted the place of advocacy and partnership in reaching out to the target audience and also speaking on “Fundraising for Non Profit Organization”, Mrs. Bisi Omolona pinpointed several ways to fund a non for profit project saying an an NGO, you cannot buy or sell but you can attract donation and sponsorship from international donor agencies to fund your projects.

One major highlight of the event was the official commissioning of a brand new Bus for BRECAN Ondo State chapter donated by Hon. Bunmi Tunji Ojo and officially unveiled by the founder, Mrs. Akeredolu for service to humanity.

Speaking on behalf of other breast cancer survivors, Mrs.Temitope Oye while sharing her story applauded Mrs. Akeredolu for coming out and sharing her cancer story as that gave her hope to visit the hospital to seek medical help.

Mrs. Oye who said she had been exposed to use of several kinds of soaps from different sources as a measure to fight back cancer in her breast noted that she found a lasting solution when she attended BRECAN’s proggramme and got the right information that helped save her life.

Earlier in her welcome address, Ondo State Chairperson, BRECAN, Dr. Mrs. Toyin Ayimoro while welcoming participants to the event, urged the people to learn the act of giving back to the society as a way of impacting humanity.

Mrs. Ayimoro who said it is important to nip vices in the bud said the society will be a better place to live in if everyone becomes his or her brothers keeper.

Topshotnews provides you with factual, accurate and timely reports of happenings around the globe.
Contact us: info@topshotnews.com.ng